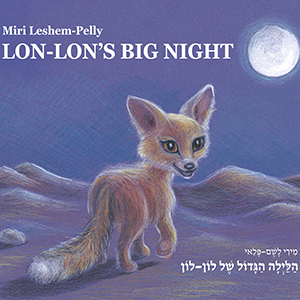 written and illustrated by Miri Leshem-Pelly of Hadera

Israel’s Negev desert, a family of sand foxes lives inside a burrow under the ground. This night, for the first time, Lon-Lon’s parents are taking him out of the burrow. Lon-Lon runs off in excitement, gets lost, and discovers new animals. Some are friendly, some not. Children love the sand fox and the animals he meets– a jerboa, a hedgehog, a bat, an owl, and a hyrax – all unique Israeli desert species.

“Sand foxes of the Negev are beautiful creatures unfamiliar to American children. This makes Lon-Lon’s Big Night a some-what exotic and fascinating story. In beautifully descriptive Hebrew, and corresponding English… The animals in their desert setting are beautifully illustrated in soft pastels. The freely-drawn pictures have great charm and child appeal. With its rich language and delicate illustration, this book is a treat for the eyes, and could easily become any child’s favorite good night reading. Very highly recommended for schools, libraries, and homes wherever Hebrew and/or English are read and spoken. If you are looking for an excellent new children’s book about Israel, here it is.” 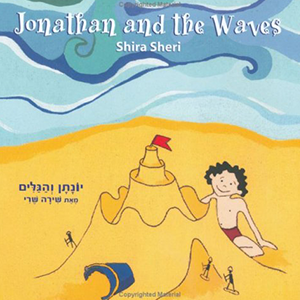 written and illustrated by Shira Sheri of Pardes Hana

The Mediterranean coastline of Israel offers long stretches of inviting beaches. Jonathan loves going with his family to play in the sand, but when he wants to join his big sister in the water, he is afraid of the waves. Jonathan’s mother turns to Jewish spirituality for a reassuringly effective solution.

“Jonathan is afraid to go into the water alone at the beach because of the waves. Jonathan has a talk with mom about who, what, and where God is, and how God gives us strength, especially when we are afraid… this could be a useful book for kindergarten and first grade classrooms, and in homes. …readable and attractive. Recommended for Jewish day school and synagogue libraries and classrooms, as well as for public libraries. Suitable for children ages 4-8.”

written by Eve Tal of Kibbutz Hatzor; illustrations by Ora Swartz of Haifa

Boris is a new immigrant to Israel. The children in his kindergarten talk to him, but Boris turns away. He doesn’t yet know Hebrew. The children try to play with him, but he plays only by himself. The children stop trying to be nice to Boris–until one boy’s father gets called up for army duty. Feeling sad himself, this boy begins to see Boris in a new light, and all is different when soon a new boy from Ethiopia joins the class.

“The New Boy/Yeled Hadash is a picture book about the appearance of a new immigrant child in kindergarten, and how the teacher helps the children to accept him and make him feel at home. The book is set in a gan in Israel… but the children’s behavior and the lessons taught and learned could occur anywhere children encounter someone different in school. The story is specific and realistic with plenty of childlike dialogue. It is not at all preachy, developing the story from the children’s feelings and their growing understanding.”

“The book is physically attractive Well designed and very readable, with lots of white space and colorful, childlike stick figure illustrations, this is a most appealing book. It would be useful in any kindergarten setting, and would serve both Hebrew and English learners well. Kindergarten teachers in Jewish day schools, synagogue schools, and parents at home will put it to good use. It teaches Jewish values that are also universal: understanding, sympathy, kindness, and inclusion. If you’ve been looking for positive books relating to Israel, start with the first three from Milk and Honey Press. Recommended for children ages 4-8.”